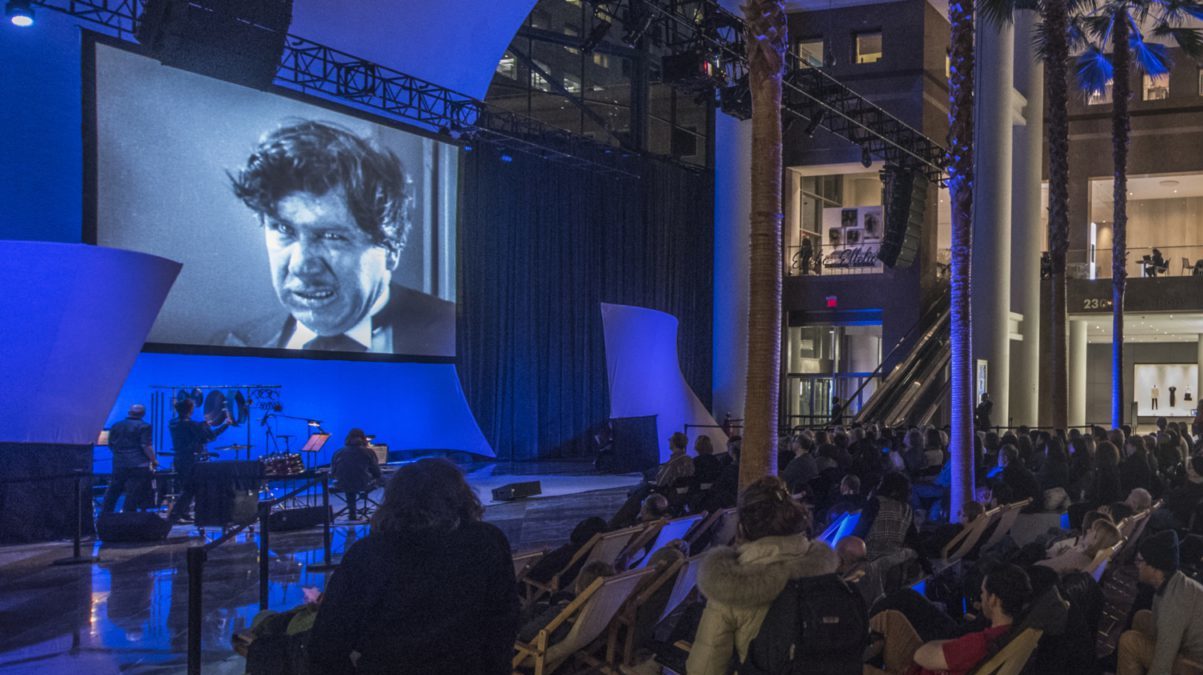 The acclaimed “Silent Films/Live Music” series is back! Experience three evenings of classic silent film screenings accompanied by a live score in the Winter Garden. Perfect for a date or night out with friends!

Using found archival footage, the film offers a meditation on electricity and modernity in East Tennessee.

Score written for harp and guitar.

Chaplin’s first full-length film as a director is a funny and deeply humane classic.

This landmark film, one of the finest in cinema history, tells the story of the trial of France’s patron saint.

Score written for an eight-piece chamber group with vocalists.

Silent films were never really silent. Throughout the 1910s and 20s, these movies would be shown with live musicians, often improvising or incorporating popular songs and classical music. Since the turn of this century, we’ve been presenting silent films in the Winter Garden at Brookfield Place with live music from some of today’s most adventurous musicians, who extend that tradition with their own scores. This annual series has been popular for a couple of reasons: the Winter Garden atrium, with its huge size, live palm trees, and dramatic lighting, dwarfs even the grandest of the old-time movie palaces – to say nothing of today’s tiny screens. And hearing new instrumental music in this setting is an easy way to enter the world of contemporary composition. Plus, we record the performances for broadcast on WNYC’s “New Sounds.”

This year’s silent films include two of the all-time classics as well as a contemporary silent film created specifically with the live musicians in mind. The latter is “Electric Appalachia,” put together by Eric Dawson, the director at TAMIS – the Tennessee Archive of Moving Image and Sound. Using archival footage, he offers “a meditation on electricity and modernity in East Tennessee” – which sounds like a dull afternoon on PBS but turns out to be a surprisingly engaging, even poignant film. Guitarist William Tyler and the suddenly ubiquitous harpist Mary Lattimore add a moving, occasionally cosmic score. After that, the extraordinary guitarist Yasmin Williams (you’ll have to see her play to understand what makes her extraordinary) will give us the world premiere of a new score to the Charlie Chaplin classic “The Kid.” This wonderful film is both funny and deeply humane – and also stars a young Jackie Coogan in his first role. Finally, we have “The Passion Of Joan Of Arc,” which regularly tops the lists of the best silent films and which is considered one of the best films of any kind. Composer David Cieri has written music for many of Ken Burns’ documentaries, among others, and brings a sizable ensemble of instruments and vocalists to this grand finale of our 2023 series.

Join us in the Winter Garden at Brookfield Place for, Music of Our Sphere, a free concert presented by Knickerbocker Chamber Orchestra in celebration of Earth Day.